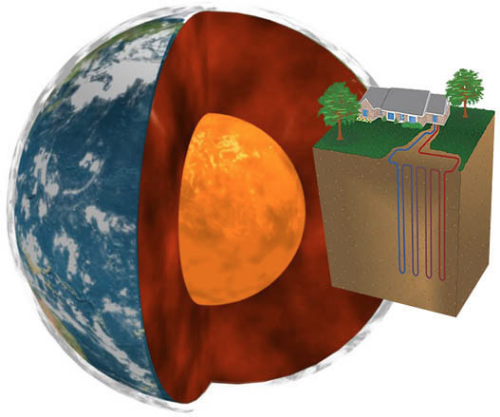 The circulation of air in the atmosphere is activated by convection, the transference of heat resulting from the fact that warm gases or fluids rise while cold gases or fluids sink. For example, if one wall of a room is heated whilst the opposite wall is cooled, air will rise against the warm wall and flow across the ceiling to the cold wall before descending to flow back across the floor to the warm wall again. The real atmosphere, however, is like a very long room with a very low ceiling.

The distance from equator to pole is 10,000 km, while the 'ceiling height' to the beginning of the stratosphere is only about 10 km. The air therefore splits up into a number of smaller loops or convection cells. Between the equator and each pole there are three such cells and within these the circulation is mainly north-south.

The result of this circulation is a flow of heat energy towards the poles and a levelling out of the climate so that both equatorial and polar regions are habitable. The atmosphere generally retains its state of equilibrium as every north-going air current is counterbalanced by a south-going one. In the same way depressions at lower levels in the troposphere are counterbalanced by areas of high pressure in the upper levels, and vice versa. The atmospheric transference of heat is closely associated with the movement of moisture between sea and continent and between different latitudes. Moist air can transport much greater quantities of energy than dry air.

Because the belts of convection cells run east to west, both climate and weather vary according to latitude. Climatic zones are particularly distinguishable at sea where there are no land masses to disturb the pattern.

Man and the winds

For thousands of years mankind has been dependent upon the winds: they brought rain to the land and carried ships across the seas. thus the westerly wind belts, the trade winds and the monsoon winds of the global circulation systems have been known to us for many centuries.

As recently as the 20th century, Arab ships sailed on the south-west monsoon winds from East Africa to India and back again on the north-east monsoon winds, without need of a compass. The winds alone were sufficient. In the equatorial convergence zone (the 'doldrums'), and in the regions around the Tropic of Cancer and Tropic of Capricorn known as the 'horse latitudes', sailing ships could drift for weeks unable to steer, while the ‘roaring forties' of the South Atlantic (40-50°S) were notorious among mariners for their terrible winds.

It was not until the development of the balloon at the end of the 18th century, however, that it became possible to study meteorological conditions at high altitudes. The balloon is still a significant research device although today it carries a radar reflector or a set of instruments and a radio transmitter, rather than the scientists themselves. Nowadays high-flying aircraft and satellites are also important aids to meteorology. Through them we have discovered the west to east jet stream. This blows at speeds of up to 500 km/h at altitudes of 9,000-10,000 m along the border between the Arctic and temperate zone convection belts.

The circulation within the different convection cells is greater than the exchange of air between them and therefore the temperature in two cells that are close to each other can differ greatly. Consequently, the borders between the different convection cells are areas in which warm and cold air masses oppose each other, advancing and withdrawing. In the Northern Hemisphere, the dividing line between the Arctic and temperate convection zones is the polar front, and it is this which determines the weather in northern Europe and North America. This front is unstable, weaving sometimes northward, sometimes southward, of an average latitude of 60°N. Depressions become trapped within the deep concavities of this front and these subsequently move eastward along it with areas of rain and snowfall. In this way global air circulation determines not only the long-term climate but also the immediate weather.