Reading Passage 3.
GARBAGE IN, GARBAGE OUT 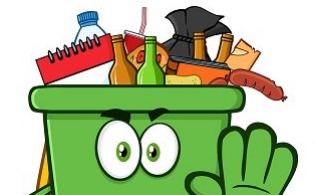 There are many ways of obtaining an understanding of people's behaviour. One of these is to study the objects discarded by a community, objects used in daily lives. The study of the refuse of a society is the basis for the science of archaeology in which the lives and behaviour of past societies are minutely examined. Some recent studies have indicated the degree to which rubbish is socially defined.

For several years the University of Arizona, USA, has been running a Garbage Project, in which garbage is collected, sorted out and noted. It began with an arrangement whereby the City of Tucson collected for analysis garbage from randomly selected households in designated census collection districts. Since then the researchers have studied other cities, both in the USA and Mexico, refining their techniques and procedures in response to the challenges of validating and understanding the often unexpected results they have obtained. Garbage is sorted according to an extremely detailed schedule, a range of data for each item is recorded on a standardised coding form, and the researchers cross-tabulate their findings with information from census and other social surveys.

This project arose out of courses designed to teach students at the University the principles of archaeological methodology and to sensitise them to the complex and frequently surprising links between cultural assumptions and physical realities. Often a considerable discrepancy exists between what people say they do—or even think they do—and what they actually do. In one Garbage Project study, none of the Hispanic (Spanish-speaking) women in the sample admitted to using as much as a single serving of commercially prepared baby food, clearly reflecting cultural expectations about proper mothering. Yet garbage from the Hispanic households with infants contained just as many baby food containers as garbage from non-Hispanic households with infants.

The project leaders then decided to took not only at what was thrown away, but what happened to it after that. In many countries waste is disposed of in landfills; the rubbish is compacted and buried in the ground. So the project expanded its activities to include the excavation of landfills across the United States and Canada. Surprisingly, no-one had ever attempted such excavations before.

The researchers discovered that far from being sites of chemical and biological activity, the interiors of waste landfills are rather inactive, with the possible exception of those established in swamps. Newspapers buried 20 or more years previously usually remained perfectly legible, and a remarkable amount of food wastes of similar age also remained intact.

While discarded household products such as paints, pesticides, cleaners and cosmetics result in a fair amount of hazardous substances being contained in municipal landfills, toxic leachates pose considerably less danger than people fear, provided that a landfill is properly sited and constructed. Garbage Project researchers have found that the leachates do not migrate far, and tend to get absorbed by the other materials in the immediate surrounds.

The composition of landfills is also strikingly different from what is commonly believed. In a recent US survey people were asked whether particular items were a major cause of garbage problems. Disposable nappies (baby diapers) were identified as a major cause by 41 per cent of the survey respondents, plastic bottles by 29 per cent, all forms of paper by six per cent, and construction debris by zero per cent. Yet Garbage Project data shows that disposable nappies make up less than two per cent of the volume of landfills and plastic bottles less than one per cent. On the other hand, over 40 per cent of the volume of landfills is composed of paper and around 12 per cent is construction debris.

Packaging—the paper and plastic wrapping around goods bought— has also been seen as a serious cause of pollution. But while some packaging is excessive, the Garbage Project researchers note that most manufacturers use as little as possible, because less is cheaper. They also point out that modernтproduct packaging frequently functions to reduce the overall size of the solidwaste stream.

This apparent paradox is illustrated by the results of a comparison of garbage from a large and socially diverse sample of households in Mexico City with a similarly large and diverse sample in three United States cities. Even after correcting for differences in family size, US households generated far less garbage than the Mexican ones. Because they are much more dependent on processed and packaged foods than Mexican households, US households produce much less food debris. (And most of the leaves, husks, etc. that the US processor has removed from the food can be used in the manufacture of other products, rather than entering the waste stream as is the likely fate with fresh produce purchased by households.)

One criticism made of Western societies is that the people are wasteful, and throw things away while they are still useable. This, however, does not seem to be true. Garbage Project data showed that furniture and consumer appliances were entering the solid waste stream at a rate very much less than would be expected from production and service-life figures. So the researchers set up a study to track the fate of such items and thus gained an insight into the huge informal and commercial trade in used goods that rarely turns up in official calculations and statistics.

The Garbage Project's work shows how many misconceptions exist about garbage. The researchers are therefore critical of attempts to promote one type of waste management, such as source reduction or recycling, over others, such as incineration or landfilling. Each has its advantages and disadvantages, and what may be appropriate for one locality may not be appropriate for another.