Reading Passage 2
POWER FROM THE EARTH 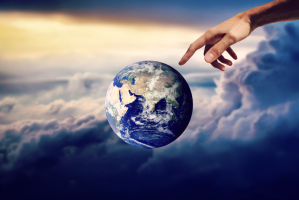 A Geothermal power refers to the generation of electrical power by making use of heat sources found well below the earth's surface.
As is well-known, if a hole were to be drilled deep into the earth, extremely hot, molten rock would soon be encountered. At depths of 30 to 50 km, temperatures exceeding 1000 degrees Celsius prevail. Obviously, accessing such temperatures would provide a wonderful source for geothermal power. The problem is, such depths are too difficult to access: drilling down some 30 or more kilometres is simply too costly with today's technology.

B Fortunately, sufficiently hot temperatures are available at considerably shallower depths. In certain areas, where the earth's surface has been altered over time—through, for example, volcanic activity—temperatures exceeding 300 degrees Celsius can be found at depths of a mere 1 to 3 km, which can be feasibly accessed. These particular areas are potentially ideal for the generation of electricity through geothermal means.

C It is possible to explain geothermal power generation as a steam power system that utilizes the earth itself as a boiler. When water is sent down to the depths of 1 to 3 km, it returns to the surface as steam and is capable of generating electricity. Electricity generated in this manner hardly produces any carbon dioxide or other waste materials. If the steam and hot water are routed back underground, the generation of electricity can be semi-permanent in nature.

E Although geothermal power generation appears to be a most attractive option, development has been slow. The world's first successful attempt at geothermal power generation was accomplished in Italy in 1904. Power generation in Japan first started in 1925 at Beppu City. Since that time, countries as diverse as Iceland and New Zealand have joined the list of nations making use of this valuable source of energy. In the year 2000, Beppu City hosted the World Geothermal Congress, whose goal was to promote the adoption of geothermal energy production throughout the world.

F The international geothermal community at the World Geothermal Congress 2000 called upon the governments of nations to make strong commitments to the development of their indigenous geothermal resources for the benefit of their own people, humanity and the environment. However, several factors are still hindering the development of geothermal power generation. Firstly, it has a low density of energy which makes it unsuitable for large-scale production in which, for example, over 1,000,000 kilowatts need to be produced. Secondly, the cost is still high when compared to today's most common sources of energy production: fossil fuels and atomic energy.

G A further consideration is the amount of risk involved in successfully setting up a new geothermal power production facility. The drilling that must extend 2,000 to 3,000 m below the surface must be accurate to within a matter of just a few metres one side or the other of the targeted location. To achieve this, extensive surveys, drilling expertise and time are needed. It is not uncommon for a project to encompass ten years from its planning stage to the start of operations. The extent of the risks involved is clear.

H Although it has long been considered a resource-poor nation, Japan, which is thought to have about 10% of the world's geothermal resources, may well have considerable advantages for tapping into geothermal power. It does have one of the longest serving power stations using geothermal energy. The station, built in 1966, pointed the way to the future when the country was affected by the two global oil shocks in the 1970s. Now there are some 17 plants in operation throughout the country which are responsible for a total output of over 530,000 kilowatts. This figure, though impressive, accounts for a mere 0.4% of Japan's total generation of electricity.

I Clearly then, further progress needs to be made in the development of geothermal energy. As long as costs remain high in comparison to other sources of energy, geothermal power will struggle to match the efficiency of existing power sources. Further research and innovation in the field, as well as government support and a sense of urgency, are needed to help propel geothermal energy towards its promising future.