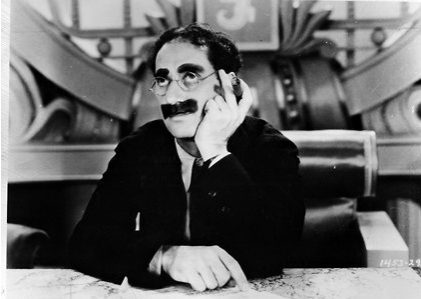 In a show-business career that spanned over seventy years, Groucho Marx successfully conquered every entertainment medium, becoming a star of the vaudeville stage, Broadway, motion pictures, radio and television. But, as the author of seven books, a play, two film screenplays and over one hundred magazine articles and essays, Groucho quietly conquered another medium, one in which he was as proud to work as any of the others. His writing is often overlooked in studies of his career, perhaps due to the quantity and variety of his other work.

Throughout his literary career, Groucho was dogged by the incorrect and unfair assumption by many critics and even by his biographer that he used a ghost writer. Most Hollywood celebrities who wrote books had professional writers do the actual work. The fact that Groucho publicly stated on many occasions that he abhorred ghost writers is clouded by his relationship with Arthur Sheekman. Friends for many years, Groucho and Sheekman had an unusual literary relationship. They worked in collaboration and each offered the other editorial help. For a brief time in the early 1940s, Groucho fronted for Sheekman, who was having trouble selling his work. By thus lending his name to another writer’s work, Groucho subjected all of his literary endeavors to suspicion from critics who simply refused to believe that an entertainer could write.

That some of Sheekman’s magazine pieces got into print under Groucho’s byline becomes apparent from reading the unedited correspondence between the two of them. The letters indicate that Groucho’s essays from this period fall into three categories: first, pieces written by Groucho with no input from Sheekman at all. In a July I, 1940, letter to Sheekman, Groucho asked, ‘Did you see that little piece wrote for Reader’s Digest? On March 17. 1941, he wrote, ‘My drool is coming out in next week’s Issue of This Week so cancel your subscription now.’ Clearly Sheekman could not have had anything to do with a piece that he was told to look for.

The second and probably largest category of Groucho’s essays of this period consists of those written by Groucho and sent to Sheekman for editorial assistance. On July 20, 1940, Groucho wrote: Tm enclosing a copy of the piece I wrote. Probably another page or so is needed to complete it, but our starting date (for filming Go West) came and I just haven’t had time to finish it. Let me know what you think of it and be honest because any other kind of opinion would be of no value to me. I won’t attempt to influence you by telling you the reactions I’ve already had, so for the love of God tell me the truth.’ Shortly thereafter, on October 10, Groucho wrote: ‘1 received your suggestions on my piece – I’m glad you liked It, If you did – you’re probably right about the beginning. I’ll do it over again.’ By the time Groucho wrote to Sheekman on July 25. 1942, it appears that some sort of financial arrangement had been made regarding Sheekman’s suggestions. On that date Groucho also wrote: Tm writing an unfunny piece on insomnia and I’ll send it in a week or so, I hope, for you to read – I’d like your opinion, proofread — correcting all the glaring illiteracies and, otherwise, do a fine polishing job.’

The remainder of Groucho’s essays from this period comprise the third category, Sheekman compositions with varying degrees of input from Groucho. The level of Groucho’s contributions to the articles in the third category ranges from actually suggesting the topic and drawing up an outline to simply rewriting a few paragraphs for the purpose of injecting his own style into the piece. In a July 10, 1940, letter Groucho wrote: ‘I think you ought to try another political piece – a campaign thing – for This Week or some other magazine. This will be an extremely hot topic for the next few months and I think you should take advantage of it. If you’ll write to me, I’ll try to jot down a few items that you could complain about.’ Presumably, the chain of events would continue with Sheekman sending an essay to Groucho for his approval and whatever rewrites were needed. On May 29, 1940, Groucho wrote, ‘Received your piece and looked it over.’ In these letters to Sheekman, Groucho always referred to a piece as either ‘my piece’ or ‘your piece’. The letter continued, ‘I thought the piece was good … and I’ll send it to Bye and see if he can sell it… I’ll just rewrite a couple of paragraphs in your piece – not that I can improve them, arrangement to take the care to at least make the piece somewhat his own.

Groucho really had no need for this entire enterprise. He gave the money to Sheekman and had no trouble getting his own work published. The principal reason for him submitting Sheekman’s work to magazines as his own was that it made Sheekman’s material easily marketable based on Groucho’s celebrity. Sheekman couldn’t have been altogether happy with the arrangement, but the reality was that he was periodically unemployed and the use of Groucho’s name brought in occasional paychecks. So it is not quite fair to call Sheekman Groucho’s ghost writer. A more apt description of their literary relationship at this time is that Groucho occasionally fronted for Sheekman and offered him the services of his literary agent, while each offered the other editorial advice. The reasons for some of their collaborative efforts not being credited as such remain unexplained, but Groucho was never shy about crediting his collaborators, and in every other case he did so.