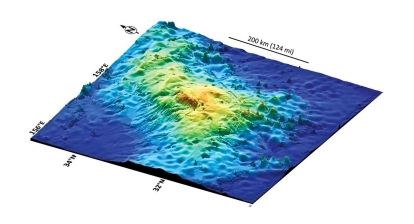 A After 36 days of battling sharks that kept biting their equipment, scientists have returned from the remote Pacific Ocean with a new way of looking at the world’s largest - and possibly most mysterious - volcano, Tamu Massif.

B The team has begun making 3-D maps that offer the clearest look yet at the underwater mountain, which covers an area the size of New Mexico. In the coming months, the maps will be refined and the data analyzed, with the ultimate goal of figuring out how the mountain was formed.

C It's possible that the western edge of Tamu Massif is actually a separate mountain that formed at a different time, says William Sager, a geologist at the University of Houston who led the expedition. That would explain some differences between the western part of the mountain and the main body.

D The team also found that the massif (as such a massive mountain is known) is highly pockmarked with craters and cliffs. Magnetic analysis provides some insight into the mountain’s genesis, suggesting that part of it formed through steady releases of lava along the intersection of three mid-ocean ridges, while part of it is harder to explain. A working theory is that a large plume of hot mantle rock may have contributed additional heat and material, a fairly novel idea.

E Tamu Massif lies about 1,000 miles (1,600 kilometers) east of Japan. It is a rounded dome, or shield volcano, measuring 280 by 400 miles (450 by 650 kilometers). Its top lies more than a mile (about 2,000 meters) below the ocean surface and is 50 times larger than the biggest active volcano on Earth, Hawaii’s Mauna Loa. Sager published a paper in 2013 that said the main rise of Tamu Massif is most likely a single volcano, instead of a complex of multiple volcanoes that smashed together. But he couldn’t explain how something so big formed.

F The team used sonar and magnetometers (which measure magnetic fields) to map more than a million square kilometers of the ocean floor in great detail. Sager and students teamed up with Masao Nakanishi of Japan’s Chiba University, with Sager receiving funding support from the National Geographic Society and the Schmidt Ocean Institute.

G Since sharks are attracted to magnetic fields, the toothy fish “were all over our magnetometer, and it got pretty chomped up,” says Sager. When the team replaced the device with a spare, that unit was nearly ripped off by more sharks. The magnetic field research suggests the mountain formed relatively quickly, sometime around 145 million years ago. Part of the volcano sports magnetic "stripes," or bands with different magnetic properties, suggesting that lava flowed out evenly from the mid-ocean ridges over time and changed in polarity each time Earth's magnetic field reversed direction. The central part of the peak is more jumbled, so it may have formed more quickly or through a different process.

H Sager isn’t sure what caused the magnetic anomalies yet, but suspects more complex forces were at work than simply eruptions from the ridges. It’s possible a deep plume of hot rock from the mantle also contributed to the volcano’s formation, he says. Sager hopes the analysis will also help explain about a dozen other similar features on the ocean floor, as well as add to the overall understanding of plate tectonics.